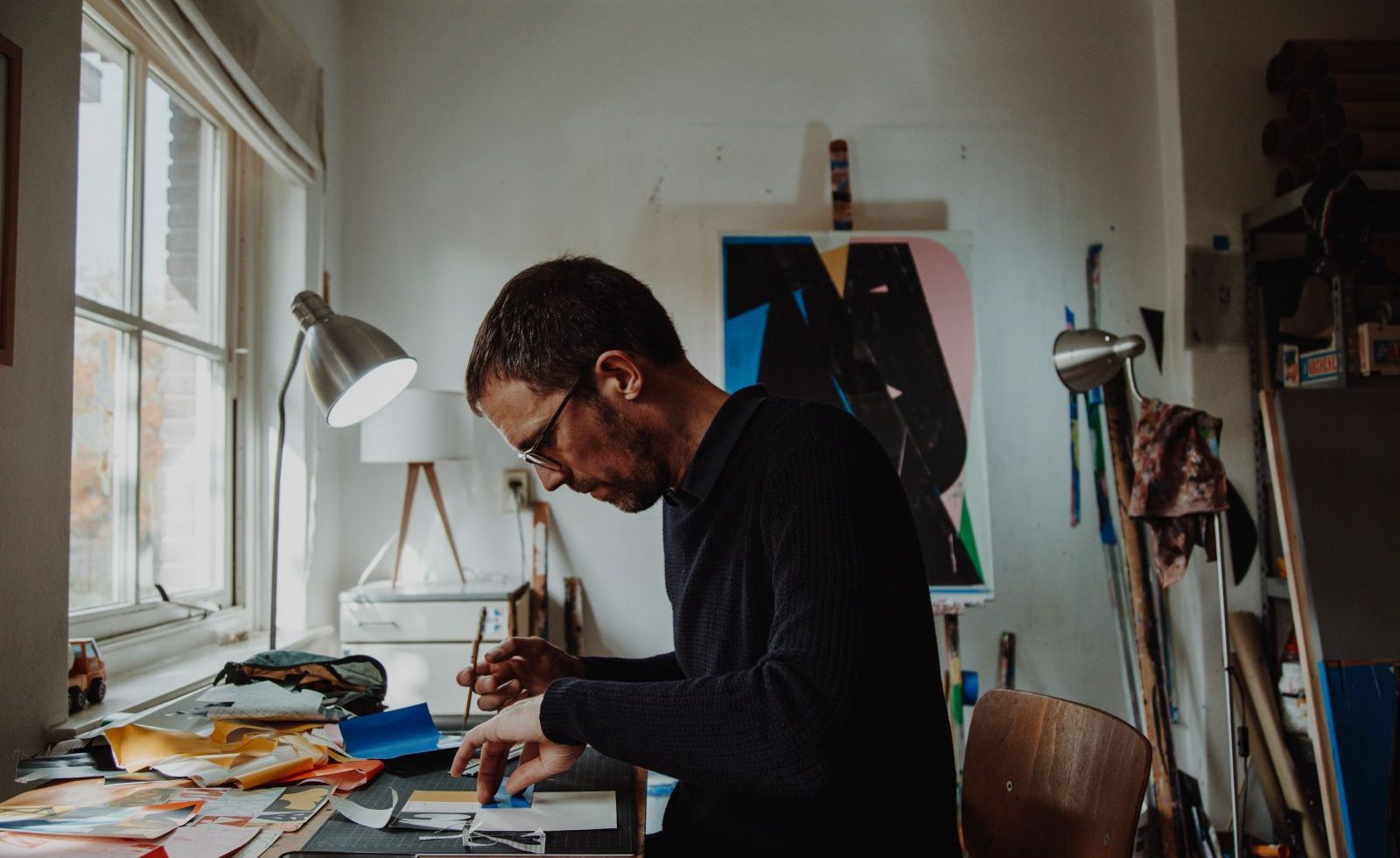 This week we took a road trip down to Eindhoven to visit Jeroen Erosie in his home and studio in preparation for his upcoming exhibition, Trust Fall. We had a chat with him about his work, and about how this series marks the return of a more intuitive, direct approach to painting. 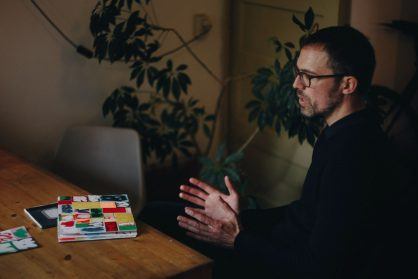 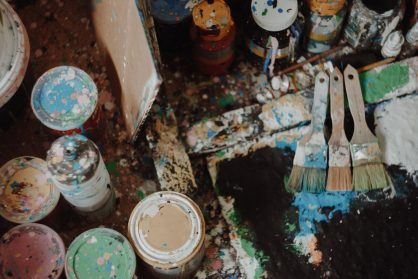 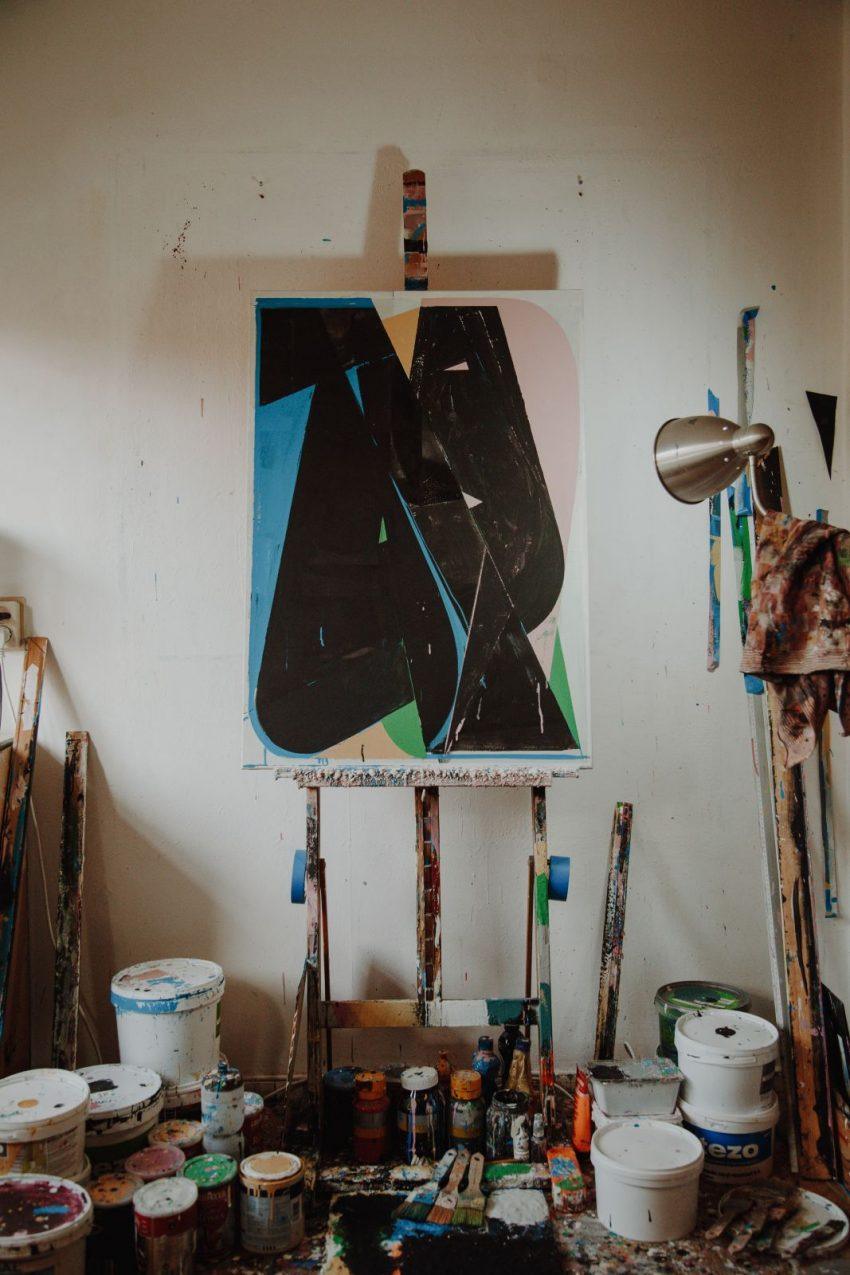 Jeroen leads us up the stairs of his modest, yet cosy apartment. Light floods in through the large windows, from which we can see the gentle swaying of the trees, their leaves now turning a golden brown as the autumn makes its ascent. Now that his previous studio is no longer in use, Jeroen’s home has risen to the challenge of ensuring a good balance between work and play. A miscellaneous collection of plastic figures, lego pieces, and small memorabilia belonging to Erosie’s nine year old son, is speckled around the apartment, giving the place a warm, whimsical feeling. The place is reminiscent of a secret tree house, the powerhouse of childhood imagination, where anything is possible. One feels inspired from simply being here. Two bikes stand in the centre of the room, an echo of the sketches with which Erosie made a name for himself. Combining studio and home life is a bonus in this sense, giving him more freedom to simply hop on his bike and go for a cycle when inspiration is hard to find. 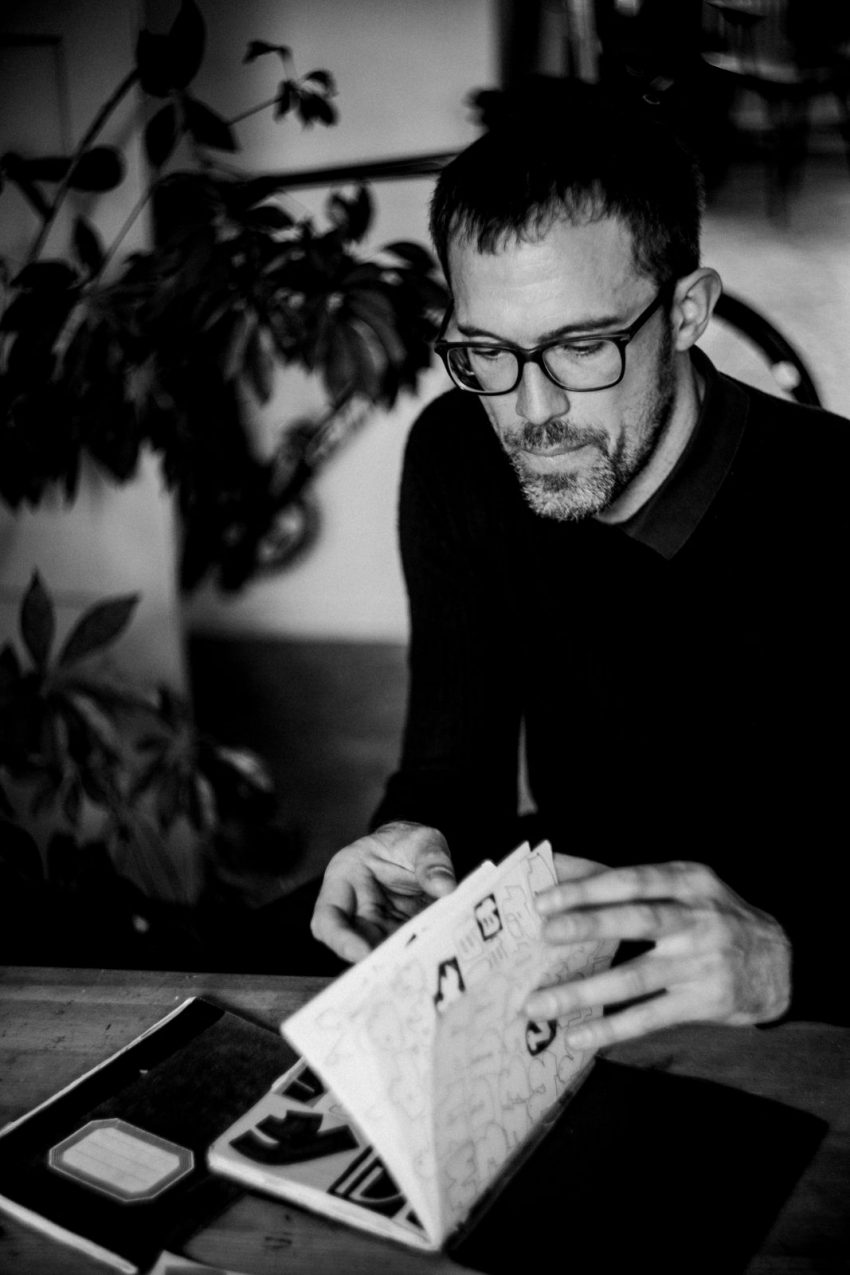 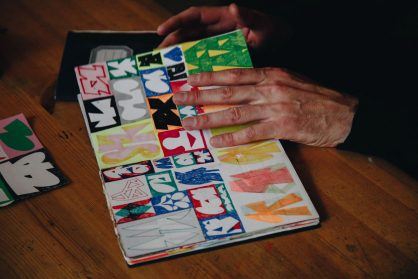 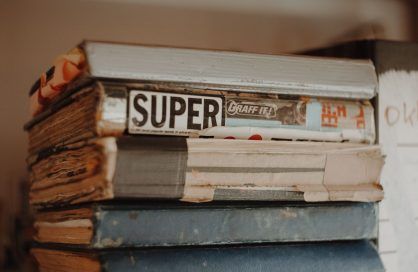 A collective admiration of the blue-toned watercolour by his young son acts as a smooth transition into the topic of art, the purpose of our visit. Laughing after a remark about not being able to distinguish between his and his son’s art, Erosie talks about the works for his solo show. He shows us his sketchbooks, a few pages of which will be featured in the exhibition. He talks about how his new approach to painting copies the carefree attitude of sketching, of not being afraid of the next move. There is a more final state attributed to the canvas, a nightmare for perfectionists who then over-dally with their creations. Treating the canvas like a sketchbook, therefore allows Erosie to simply trust his artistic intuition and not overthink the process. 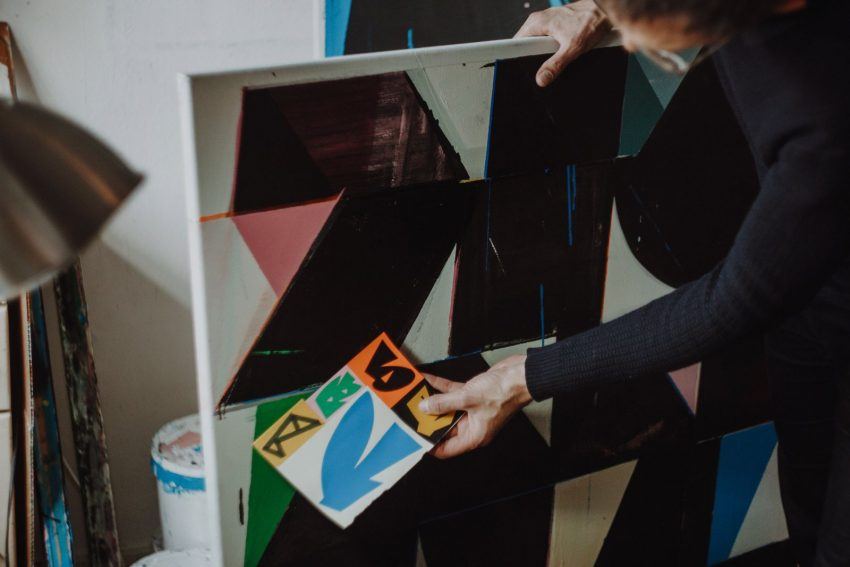 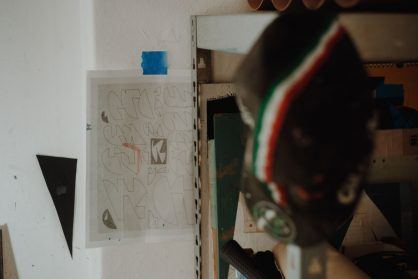 As is almost inevitable nowadays, our discussion on sketchbooks brings us to the topic of Instagram. After talking about how his work was seemingly copied by another follower, the social media platform can be seen as a space that simultaneously boosts and threatens an artist’s reputation. Every piece of art has elements of another within it, yet where do the boundaries between inspiration and pure plagiarism lie? The free flow of information and image sharing online is at once a constant source of inspiration, yet in the end it may be hard to find the true original. What Instagram does allow though, is for art to become a part of the everyday lives of people, ridding it of its elitist reputation. 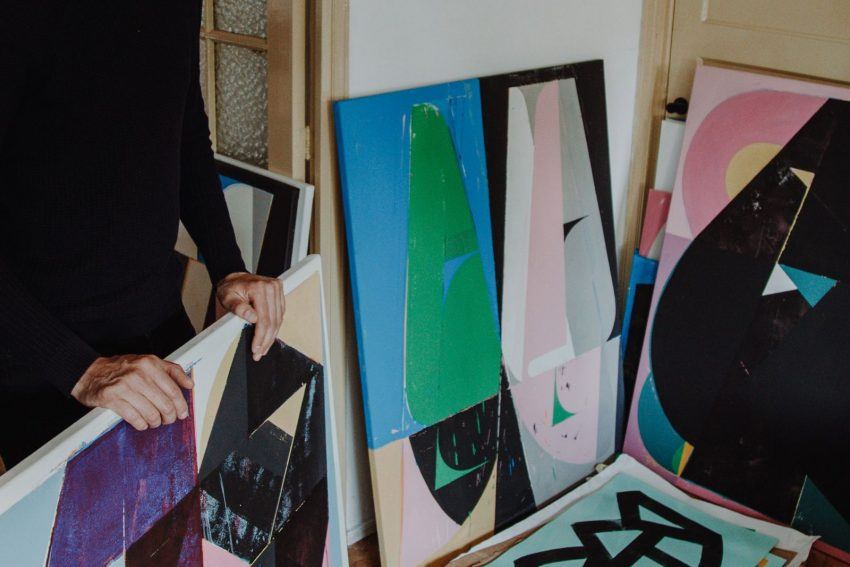 Erosie’s success began, and is still prominent, outside of the Instagram bubble. His bookshelves are bedecked with a collection of books on graffiti that remind us of his legacy within the street art scene. He tells us of his experience with graffiti, of being undermined as a “graffiti artist” in Rotterdam, both for his “foreign” presence in the city and for his distinct style; a break of two laws of the game. His style exists in between the two worlds of graffiti and illustration, not quite belonging to either one, yet his work visibly incorporates a mix of both. We asked him if his street art was ever intended as an act of rebellion, to which he laughed and said that, in a way, it was. Any art that takes up the realm of public space, an illegal activity in essence, is therefore an act of rebellion. That is why he wouldn’t do it now. He laughs at the idea of being arrested by a 24 year old cop and having to tell his son that daddy’s spray paint has been confiscated. When he does create murals, it is often for commissioned pieces, or as part of street art festivals such as Palma Festival in Caen (FR). 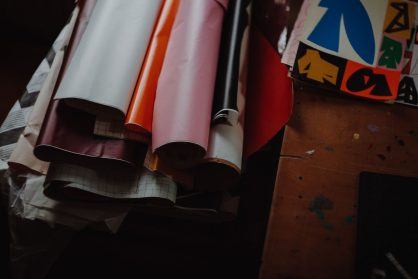 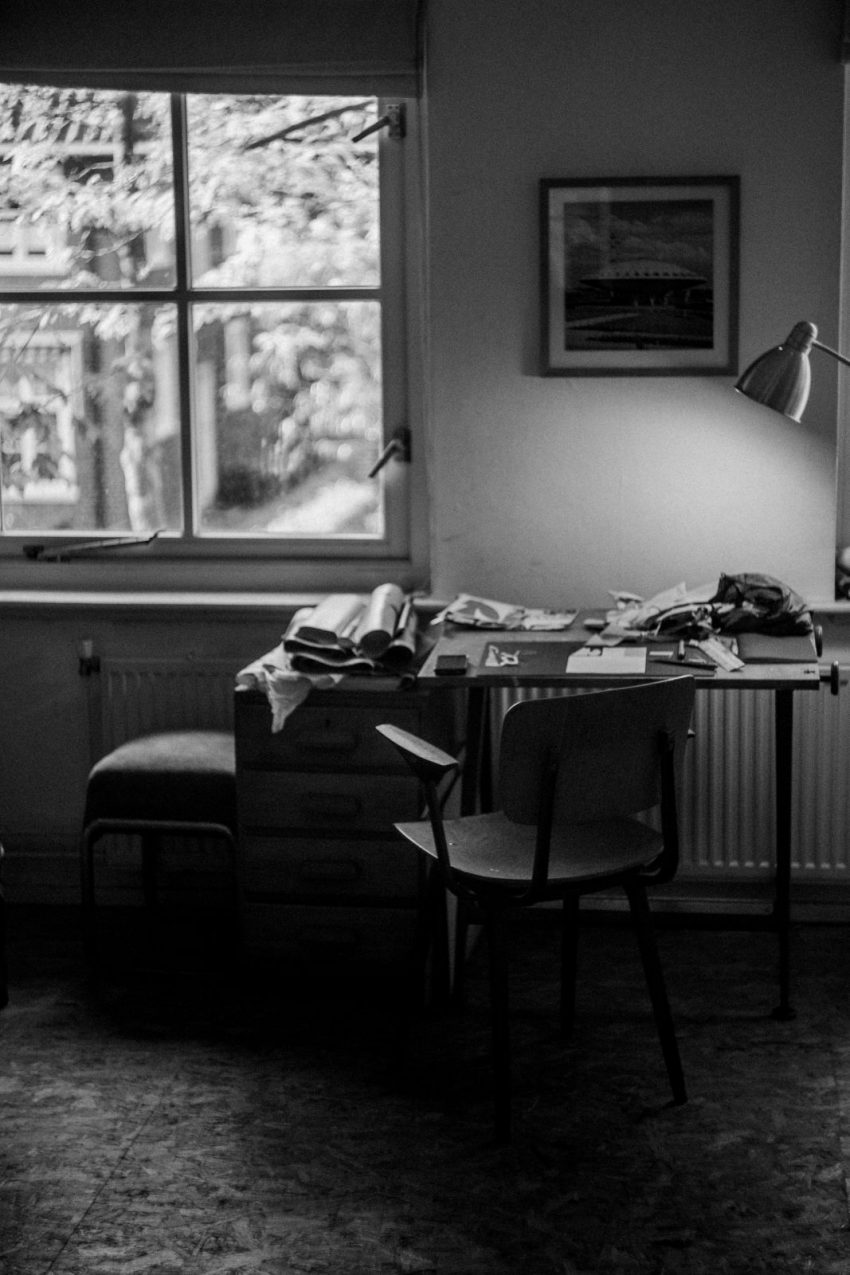 Before we make our way back home, we get a sneak peek of the paintings he’s been working on, ready to be shown in the gallery in a few weeks time. Some are not quite finished yet, he tells us, but the palette of pastel pinks and baby blues create yet another striking contrast with the signature bold black lines of Erosie’s shapes. We can’t wait to get the pieces into the gallery and get the show started. 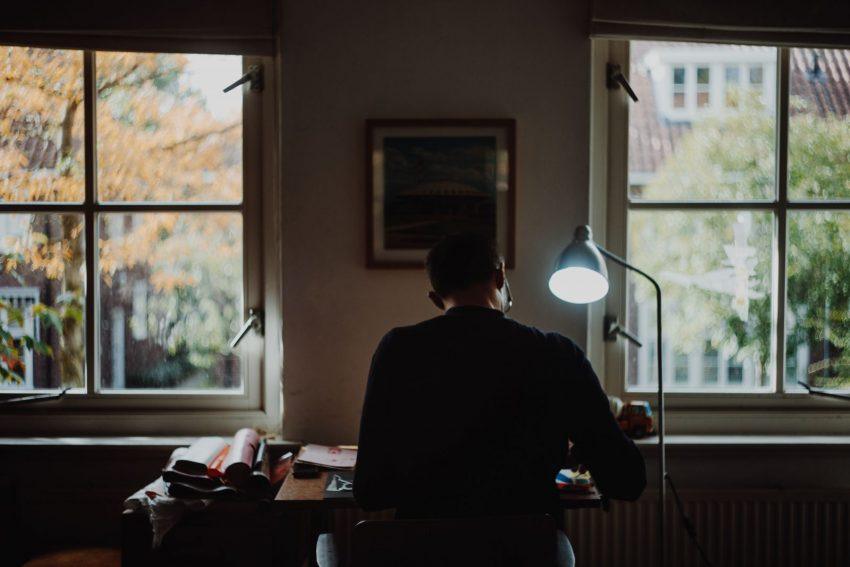 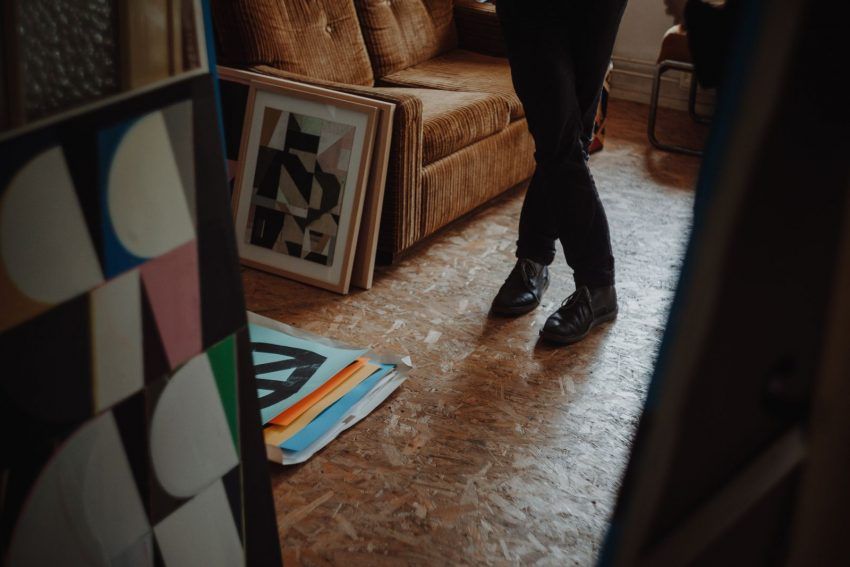 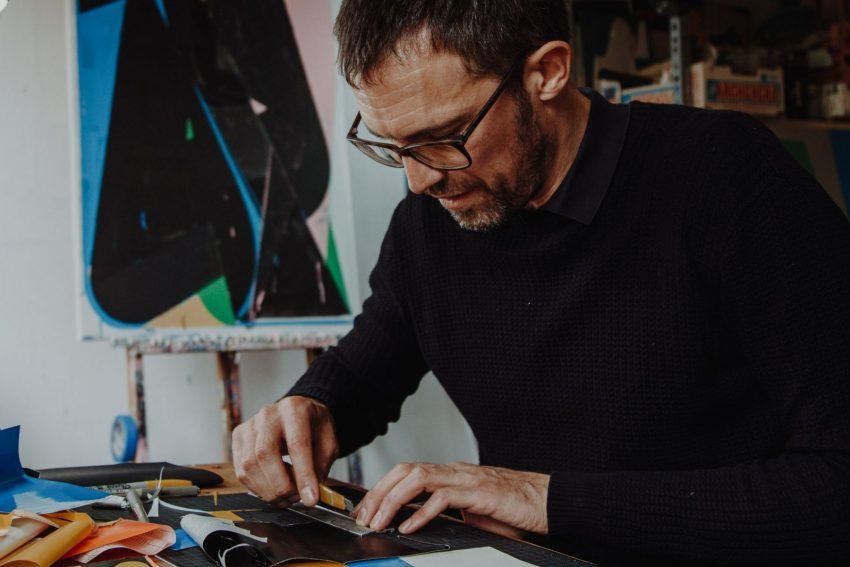 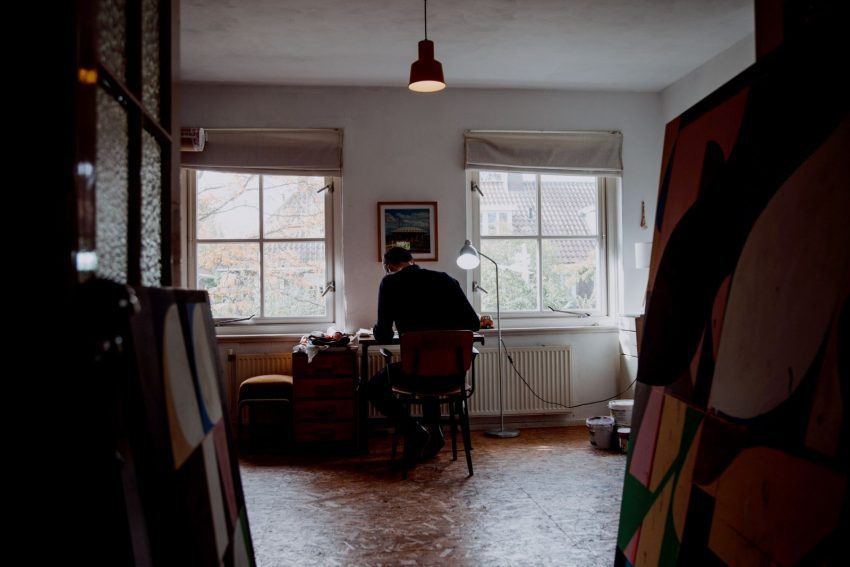